Sol LeWitt (1928 – 2007) was an American artist, best known for establishing Conceptualism and Minimalism as dominant artistic movements in the years following WWII. Sol LeWitt’s art appears on both Imagery’s 1992 White Claret and 1996 Cabernet Franc labels. Come by the tasting room and we will be sure to point it out!

Sol reduces his art to its most basic elements. His work is characterized by playing with three factors: color, shape, and line. The art possesses great complexity while only employing simple features.  LeWitt pushed his viewers to the very limits of artistic understanding and appreciation—broadening their conception of what art is, and what art has the potential to be. 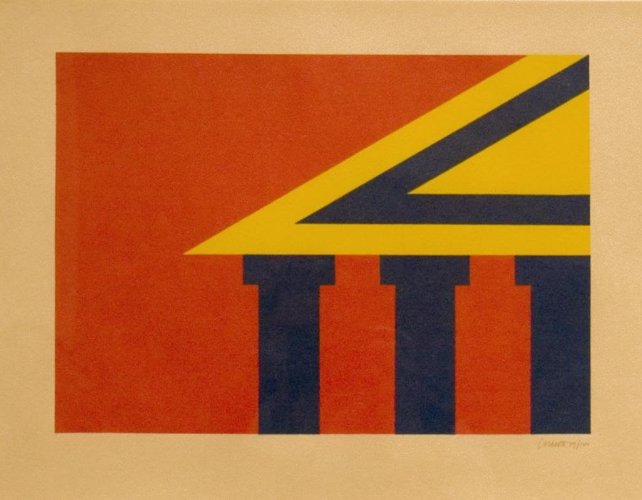 In this piece the Parthenon is captured with pure primary blocks of color. The lines are clean and strong. The Parthenon’s triangular top jumps out in empty space.  LeWitt’s uses contrasting colors—yellow and blue—to suggest the details of the building. The left half of the print in vivid red, and evokes the glorious Sonoma sky at sunset.

His interpretation of our Parthenon is powerful, but it is formed with geometric lines and primary colors. As kids, we begin to explore the world’s spectrums of colors while innocently playing with red, yellow, and blue building blocks. These three colors evoke a wide range of emotions. A matador can enrage a bull by waving a red towel. Blue birds are a pleasant surprise. Yellow on the traffic light will either make you pump the breaks or accelerate.

Ultimately, LeWitt’s print offers a unique perspective on the ways basic geometric forms can be both derivative and unique. Replicas of the Parthenon link Benziger and Imagery wineries. The practice of representing anything in the real world is only a translation of what we observe. LeWitt makes no attempts at realism, and in doing so, challenges the viewer to consider and reconsider what makes something “Classic” in the first place.